-A A +A
Sarah Claire

Une Histoire de l'énergie. Les servitudes de la puissance is a long-term analysis of the energy systems that have shaped our societies since pre-historic times. This cognitive map depicts the continuities and transitions of the relationship between man and nature till our modern society and its democratic challenges. 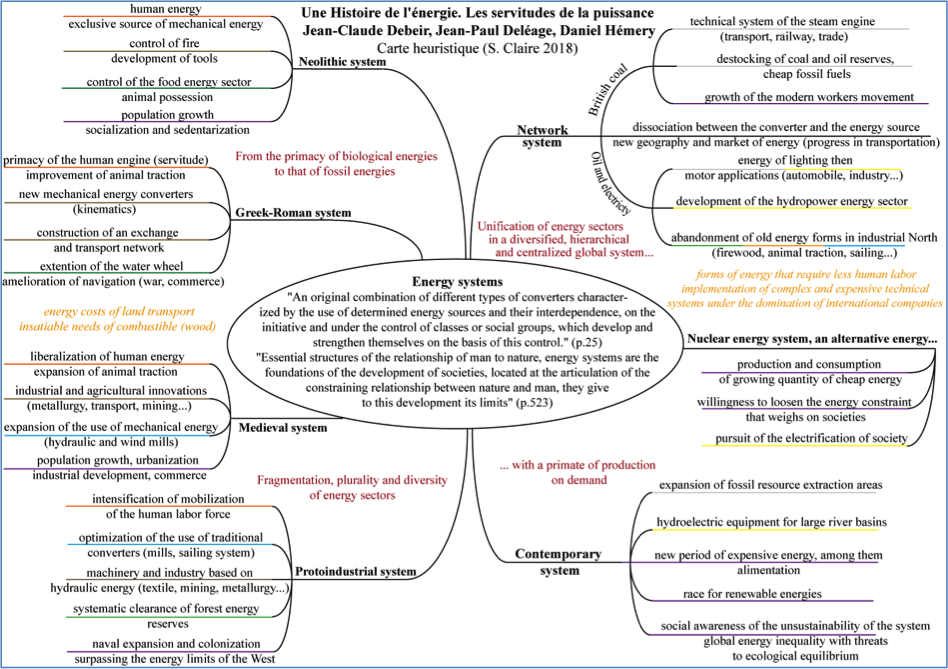 This cognitive map of Une Histoire de l'énergie. Les servitudes de la puissance written by Jean-Claude Debeir, Jean-Paul Deléage and Daniel Hémery, attempts to reconstruct the two main perspectives developed by the authors, which constitute the major contributions of this book. The first perspective is conceptual: it constructs the analytic notion of “energy systems”. The second perspective is a longue durée approach that enables to think about the society we are building. A cognitive map, that is a visual representation of a thought pattern, reproduce the authors’ argument in its entirety and complexity, and invites a synthetic and in-depth analysis. In the center of the book and the map is the notion of “energy system” surrounded by his historical translations: the preindustrial systems on the right and industrial systems on the left, in chronological order from bottom to top. The different branches of the systems (orange: human labor and animal traction, blue: hydraulic and wind resource, green: biomass, grey: fossil energy, yellow: electricity, purple and brown: social and technic considerations) bring out the different energy sources within each system and point out the rupture or continuity in their exploitation by the different social models.

Throughout the book, the authors reconstruct the characteristics of the main energy systems developed by western and Chinese societies, highlighting their issues, constraints and dependencies. The notion of “constraint”, central in the authors' analysis to explain the development and decline of energy systems, appears to be both related to the physical characteristics of the resource but also to the exploitation form put in place by the various forms of social organization, thus modelling a socio-energetic system. The authors shed light on the persistence of the constraint of transportation and the insatiable needs of wood encountered by the Neolithic, Greco-Roman, medieval and protoindustrial systems all based on the extraction of organic energy. The diversity of energy sectors inside preindustrial systems is gradually being replaced by the creation of global and centralized energy networks within nascent capitalism: the era of coal, oil and electricity networks is ushering in a new period the relationship of man to nature by breaking the previous constraint of transportation. The newly formed energy sector in the hands of a few global companies offers energy that tends to precede demand. The alternative of nuclear energy as a way out of global energy inequalities, climate and environmental crisis is no longer as promising and is not adequate to loosen the energetic constraint, which weighs on capitalist societies.

With this invitation to think about the long term, the authors show the succession of energy paradigms, the last of which being the energy transition, and the complexity of the passage from one to the other, often much less radical than one might think, in the manner of the evolution of human societies. They show that no energy system exists without constraints and that we must rethink ours as a whole, starting first by questioning its capitalist structure and our weakened democracy. Energy model and society are thus thought together with their mutual determination. The authors' desire to think of energy in its social, economic, environmental and political roots, as this map tried to represent, should thus continuously animate any history of energy so that it remains a history of humanity.